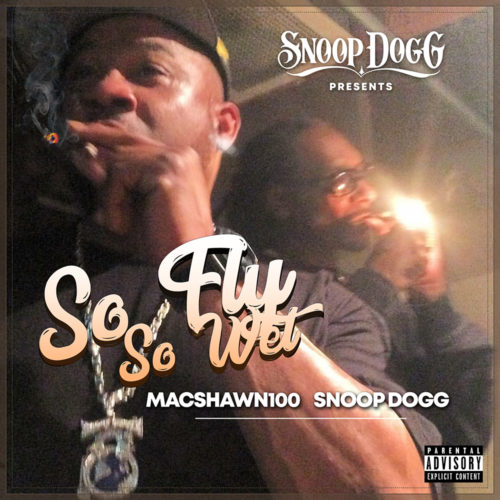 Snoop Dogg Presents MacShawn100 aka “The Creator Of Slang”, with the release of the hard-hitting and energetic collaboration single by MacShawn100 and the one and only Snoop Dogg, titled “So, Fly, So Wet”, produced by Troy “Tha Rolla” Sanders.

However, MacShawn100’s affiliations with Snoop and the original Dogg Pound runs much deeper, and back to the ‘90s. The legendary Vallejo, California rapper, whose first cousin is rap veteran E-40, made his debut feature on E-40’s 1995 single “Sideways”. He was originally signed to Sick Wid It Records, and later Death Row Records, where he performed with icons like Daz Dillinger and Kurupt of Tha Dogg Pound and appeared on Death Row albums such as ‘Chronic 2000’, Tha Dogg Pound’s ‘2002’ and ‘Too Gangsta For Radio’. He has released several solo albums to critical and commercial success, and appeared on over 70 various albums including E-40’s platinum-selling ‘In a Major Way’.

Multi-platinum artist, actor and entertainment icon Snoop Dogg has maintained a remarkable and nearly unparalleled run as one of the most famous rappers in the world for over a quarter century. He has raised the bar as a global entertainer and innovator, selling over 37 million albums worldwide, setting record sales, and topping billboard charts, whilst defining Hip-Hop history since 1992. The 16-time Grammy nominee, who received a star on the Hollywood Walk of Fame in 2018, is currently preparing to release his 17th studio album ‘I Wanna Thank Me’ due in August, the album was named after his viral Hollywood Walk of Fame acceptance speech.

Brooklyn artist bk cashmere is one of the most talked about hip hop artist today. Widely known for being crowned by source magazine in (2004) as the artist who was leading the charge in bringing new life back to New York hip hop, he has matured into a fascinating, complex artist. In 2005 The proposal was released, hosted by Hot97 DJ Kay Slay, The proposal’s follow up, Me & My Music, was released in 2006, full of high profile collaborators- Big daddy Kane, Maino and Bun B. All the while, BK Cashmere kept the albums coming, Take Me Away (2011) a hardcore hip hop masterpiece is most notable for being nominated as album of the year at the underground music awards. His Latest album 10 The Prelude has an unmatched mix of inventive wordplay, compelling conceptual narratives, and versatile production from producers Dj B Original, Synestheticnation, Scott Supreme and Tone Jones. Making it a highly anticipated album. BK cashmere perceives 10 The Prelude as a glimpse of what’s next, calling the album the prelude because it’s a new genesis leading to his testament of things to come, 10 the prelude is out now on all music platforms.